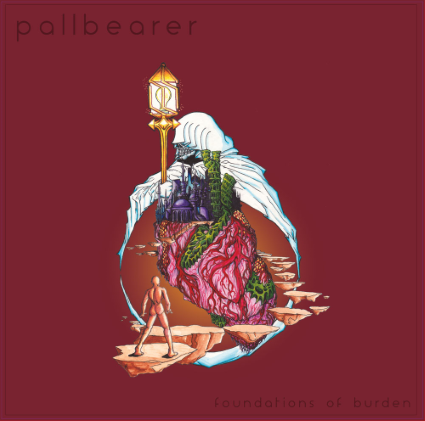 Doom metal rarely sounds more epic and triumphant than it does on Pallbearer‘s outstanding debut album, Sorrow and Extinction. It’s a genre that can very easily descend too easily into funereal bleakness, or on the other end of the spectrum, like Electric Wizard, stoned as fuck. Little Rock, Arkansas foursome Pallbearer are neither of these, instead choosing a path of towering melody and surging, soaring power. Their take on doom is unusually accessible — which is both counterintuitive, given the fact that most of their songs hover around 10 minutes apiece, and entirely appropriate for a band with such a heavy Black Sabbath influence. And as elegant as their mighty arrangements can be, they’re invariably crushingly heavy — even if just under the weight of their atypical beauty.

“The Ghost I Used To Be,” from the band’s upcoming album Foundations of Burden, is another impossibly massive track, at 10 minutes and 17 seconds, and still not their longest by a few minutes at least. It comes in crushing within its first 30 seconds before ushering a gorgeously melodic interlude of shimmering guitars and dreamy fog. That doesn’t last very long; one minute in, and the band surges right back into magnificent, thunderous, stomach-rumbling, hammers-to-the-sky doom of the highest order. Brett Campbell’s vocals sound clearer and more melodic than usual, not that he’s ever been one to bark or screech. But Campbell’s voice, here, is an essential instrument in a symphony of intensity. In fact, it’s almost not quite right to look at this track as a “song” per se, but a piece that contains numerous movements, from its righteous riffs in its first third, to a faster and sludgier midsection that wouldn’t sound out of place on Baroness’ Red Album, to a gentle reprieve at 7:13, and finally two minutes of monumental coda toward its transcendent end. Pallbearer had already re-written the rules of doom metal two years ago, but “The Ghost I Used To Be” suggests maybe that was only a first draft.

[from Foundations of Burden, out Aug. 19; Profound Lore (pre-order)]