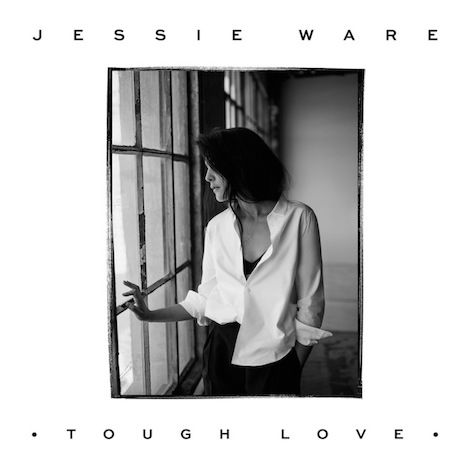 When asked by The Fader this month about her secrets to writing a love song, UK chanteuse Jessie Ware offered a humble response: “I was never one who wrote songs when I was younger—I felt very inexperienced, and I still feel rather inexperienced. It’s just something I’ve learned, a skill I’ve acquired that I don’t think I’ve finessed.” She comes off as incredibly modest — charmingly so for an artist who received a Mercury Prize nomination for her outstanding first album, Devotion. For Ware, however, modesty isn’t just a sign of character, it’s part of an aesthetic. Her soulful style of pop music is beautifully understated, so much that it feels of an entirely different world than even reasonably close contemporaries like Katy B or FKA Twigs. She certainly holds her own on beat-banging jams like SBTRKT’s “Right Thing to Do,” or “Confess to Me,” from Disclosure’s stellar debut Settle. But Jessie Ware’s second album Tough Love finds her circling back around to what may be her greatest strength: The fine art of understatement.

On the surface, it might look — based on Ware’s list of collaborators during this round — that maintaining a slow-burning fire isn’t on the agenda. Early single “Say You Love Me” was co-written by 2014 best-seller and Taylor Swift collaborator Ed Sheeran, and some of the production on the album was handled by bass producer Two Inch Punch and Top 40 dynamo Benny Blanco, whose credits include Katy Perry’s “California Gurls,” among other subtlety-free hit singles. But Ware has a way of working with those willing and capable of adapting to her own uniquely sensual aesthetic than attempting to mold a different one around her. And on Tough Love, Ware’s style feels confident and powerful in a way that bears her own inimitable stamp.

Tough Love, much like its predecessor, feels like a late-night album, full of ethereal soundscapes and hushed expressions of desire, heartbreak and an entire complicated spectrum of human emotions in between. And in many ways, it feels like an extension of that record, but there’s a looser, more casual feel about it; just compare the dreamy and stylized image of her on that album to the relaxed and melancholy portrait of her adorning this one for a brief comparison. That’s not to say there’s no trace of drama or bombast — while relatively understated at first, the stunning ballad “Pieces” rises up into a soaring ballad laden with strings and overwhelming feelings. Yet, by and large, the post-bass production of her previous album has largely been reshaped into warmly organic sounds and textures. There are gorgeous guitar licks tracing the contours of “You & I (Forever)”, a vibrant stomp-and-clap percussion behind “Cruel,” and even an acoustic guitar in the unusually straightforward “Say You Love Me.”

None of this is to say that Ware has oversimplified things on Tough Love; the songwriting is as honest and sophisticated as it’s ever been, and often sounds stronger and more assured than her debut. The opening title track is one of her best songs to date, a subtle pop anthem built on wispy grooves and “When Doves Cry” drum effects. Her voice is at once otherworldly and sympathetic, lamenting, “When your heart becomes a million different pieces/ That’s when you won’t be able to recognize this feeling,” just as the track reaches toward its mesmerizing climax of a chorus. She takes a different tack on “Sweetest Song,” meanwhile, descending into a darkly sensual midnight funk guided by her hypnotic suggestion, “I could hear your song forever.” And on the incredible “Want Your Feeling,” co-written and produced by Blood Orange’s Dev Hynes, Ware turns sadness into a gorgeous sensory experience, her regrets and hesitations circled by an infectious, albeit hard-to-place loop.

There’s something fascinating about Ware’s brand of pop, and how comfortable it is with nuance. She’s incredibly adept at finding those slight moments of intrigue and transforming them into something that feels bigger, which is very rarely how big-P pop artists operate. And that, to a degree, is why she isn’t one. She occupies her own, unusual niche; you can call it “alternative R&B,” or sophisti-pop. The name doesn’t matter. But just as the casual, evocative image of Ware on the front of Tough Love suggests, there’s no need to rely on broad and flashy statements when you have the gift of honest expression on your side.

Find it at: Buy at iTunes