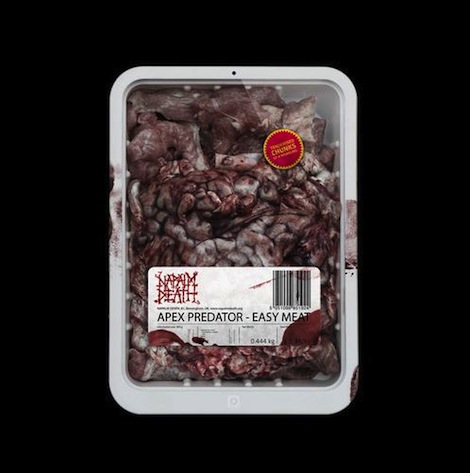 Napalm Death isn’t the same band it was when first releasing debut album Scum in 1987. It sure as hell isn’t the same band that first formed in Birmingham, England in 1981. And it’s arguably not even really the same band it was 15 years ago, though the personnel changes have, at least, been kept to a minimum. At very few points in its history has Napalm Death exactly resembled what it was like even just a few years prior, and that’s almost part of the band’s mission statement at this point: Keep moving forward — the grind never ceases.

Moving forward can be awkward when the turnover’s high, however, and even back in 1987, the group that released Scum featured no original members of Napalm Death (though it did feature a young Justin Broadrick). The Napalm Death of now has a surprisingly stable core, however, having retained the same lineup for more than a decade, and the chemistry of the players involved has resulted in some of their best work to date, namely 2012’s Utilitarian — an album that not only boasted some remarkably fresh takes on death metal, crust and grindcore, but likewise found them collaborating with John Zorn for an extra dose of no wave sax noise.

Utilitarian certainly stands out as a key example of how far Napalm Death has come in 28 years, but its follow up, Apex Predator — Easy Meat, is a testament to their consistency and creativity. On some level, it sounds exactly like a Napalm Death album should sound — it beats you senseless, and when it’s done you’ll be expected to ask for another. But a Napalm Death album has come to comprise so much more than the rote tropes of basic grindcore. It certainly does here, anyway, finding the UK quartet infusing their relentless pummel with more nuanced textures and melodies.

You’re expecting me to say, “As nuanced as melodies on a grindcore album can be,” but that wouldn’t be giving Napalm Death enough credit. The beatdown shout-along of “Bloodless Coup,” for instance, might not be the best example. But the primal noise chants of the opening title track indicate that there’s a lot more happening here than genre conventions. “Smash a Single Digit,” however, is a face-first shove down the group’s terror-chute, but even here, guitarist Mitch Harris aims for something a little more interesting than an onslaught of power chords. There are grooves galore on “How the Years Condemn,” spindly staircases of riffs on “Stubborn Stains,” and an air of gothic grandeur on “Dear Slum Landlord.”

Even when Napalm Death launches straightforward into a furious rush of hardcore like “Hierarchies,” they do so with a swagger and acumen that comes from honing and shaping their style while shedding their own blood and sweat over several decades. It’s remarkable, then, that they’re not holding fast to any rigid definition of what their band is. Napalm Death more or less defined grindcore on Scum; nearly three decades later, they’ve earned the right to change that definition as they see fit.

Napalm Death announce new album, Throes of Joy in the Jaws of Defeatism