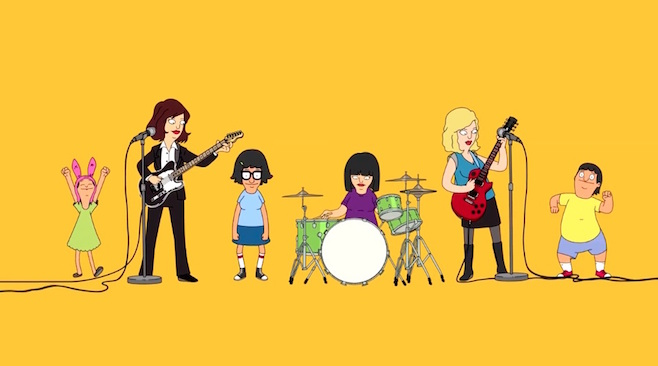 Well, this is awesome. Sleater-Kinney has just released a new video for “A New Wave,” from their excellent new album No Cities to Love. Only instead of having some kind of arty concept, or a simple performance clip, the band becomes a cartoon! And not just any cartoon — Carrie Brownstein, Corin Tucker and Janet Weiss are animated into the world of animated TV show Bob’s Burgers. It’s a super fun clip, in which the show’s character Tina Belcher presses play on her CD player and all of a sudden the band starts playing in her bedroom. It’s pretty amazing; the show’s animators even amazingly captured Brownstein’s leg kicks and Janet Weiss’ swaying hair. It’s not just hilarious and adorable, it’s actually pretty accurately detailed!

Album of the Week: Sleater-Kinney – The Center Won’t Hold