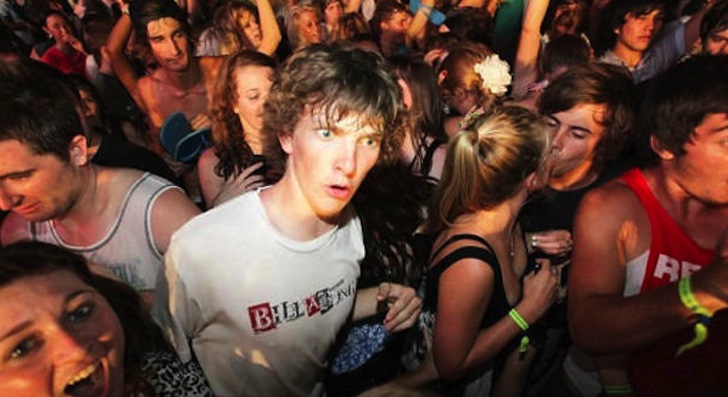 It’s been a busy week in the middle of a whirlwind month, but I wanted to make sure this column got out to YOU the reader on time. So this time around, we’re going to focus less on my opinions and let the intro serve as a ‘recommended reading’ of sorts.

So, here’s the deal: You shouldn’t be an asshole. You’d think that would be a given, especially in a scene that is supposedly based on outcasts and rejects. But alas, punks (especially those who aren’t of the straight, white cismale variety) often find themselves repeating themselves on this point. In particular, the idea of contact/moshing at shows crops into my head at almost every punk show I attend. I grew up in a very mosh-centric scene, and there’s something about that kind of interaction that I truly enjoy but, at the same time, I constantly see folks using the word “mosh” as a cover for “consent violation.” If you’ve ever been in a pit, you know exactly what I’m talking about: That asshole who makes it their business to touch or punch anybody and everyone despite every possible visual cue to the contrary.

I was expressing this frustration to a friend recently and they passed this zine my way. It’s called Destroy the Scene: Bros Fall Back, and it did a beautiful job of articulating some of my thoughts on punk show environments, and clued me into a variety of different perspectives as well. So this month I’m giving you homework. Read the zine; reflect on it; then come back here, listen to some tunes and leave a comment if you’d like. But, most importantly, just don’t be an asshole.

In-depth rundowns of the five best punk tracks of September 2015.

I try to keep this column as diverse as I can, and that includes regional diveristy as well. One way I do that is my limiting the amount of in-state acts I cover, but I had to throw in some local love this month to Marine Corpse, a long-standing Bloomington trio who recently opened for G.L.O.S.S. “Landlords” is a cut as satisfying as it is brief, launching straight into a few sludgy riffs before pummeling away at a hardcore diddy that thrashes and crashes with the best of ’em.

[from Gaia Shrugged, out now; self-released]

I’ll be honest, I don’t know if most folks would call Blank Realm a punk band. More often than not, they fit in the more angular side of the shoegaze spectrum. But “No Views” is definitely a punk track, a bass driven noise-fest that shakes and plunders its way through shout-fueled verses and an apathy-as-cause chorus of “I’ve got no views on it/ It’s just something that I do.” As much as I love the more atmospheric moments on Illegals in Heaven, this is definitely a side of the band I could stand to hear more of.

[from Illegals in Heaven, out now; Fire]

I’ve mentioned before how one person with an acoustic guitar can out-punk a full band with the right attitude and motivation; this track is a grade-A example of that. April Mei plays simple, Americana-influenced pop-rock, but her subject matter adds a beautiful layer of grit and edge to her music. Case and point: “Small Town Wolfhound” is a blunt and powerful anti-cat-calling anthem that finds Mei confronting creeps and rape culture head on. The point is simple—“I’m not gonna fuck you“—but the road Mei takes to get there is both cathartic and empowering.

PWR BTTM are a shining example of an impressive little sub-genre I like to call “pop punk that doesn’t suck.” That’s because, even when the music was spot on, the ’90s and ’00s pop punk scenes tended to come with more than a few strings attached to various -isms. But PWR BTTM are both fun and progressively-minded, channeling their various experiences and insights into tracks they self-describe as “genre-queer” for a more-than-satisfying effect. “1994” is a simple song, but bold in it’s energy and perfect as a teaser for the duo’s upcoming full length.

[from Ugly Cherries, out September 18; Father/Daughter]

SWINGS are the next logical step in the genre-bending legacy of the D.C. indie punk scene: deceptively mellow, jazz-inspired rock that hides its angular qualities in subtle corners. This b-side from their upcoming sophomore record (and Exploding in Sound debut) mixes a tension-infested groove with just enough pop sensibility to keep the listener at the edge of their seat. If this is the kind of track that SWINGS are leaving on the cutting room floor, I can’t wait to hear the full LP.

[b-side from Sugarwater, out November 13; Exploding in Sound]

A quick and dirty rundown of the best punk albums of now, with links to full length reviews (when available).

Причал‘s Отголоски: A bunch of Russian emo/screamo was recently dumped on BandCamp by a few key labels and I have to admit I’ve been just a little obsessed. This post-hardcore-leaning group doesn’t stray too far from the genre’s traditional formulas, but their execution and genuine commitment to the sound left me quite impressed. (April 10; Unlock Yourselves)

Meat Wave‘s Delusion Moon: SideOneDummy Records are on a roll the last couple years. Their latest win comes in the form of Delusion Moon, a series of surf- and pysch- rock influenced jams from a Chicago trio who just seem to get more and more weird and beautiful every time I hear something by them. (Sept. 18; SideOneDummy)

Win a copy of our Album of the Week, Meat Wave’s The Incessant

Album of the Week: Meat Wave – The Incessant