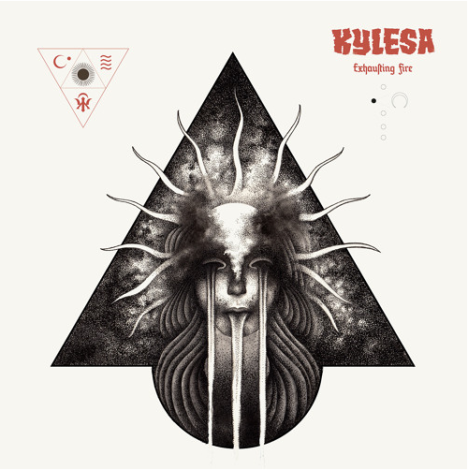 Kylesa‘s been at it for a long time. Over the span of more than a decade, the Georgia band has honed a unique style of thick, roaring sludge and delivering it to town after town across North America in doses potent enough to cause bodily vibrations. In fact, they’re a reliably strong live act, their arsenal of crusty set staples sufficiently ample to comprise a number of what you might call hits: “Tired Climb,” “Unknown Awareness,” “Hollow Severer,” “Don’t Look Back,” to name a few. The band’s built up some impressive riffs and meaty hooks over the years, and over time, those riffs have become more nuanced, those hooks more atmospheric. Their heaviness as a band is still comfortably intact, but there’s a lot more room for sounds other than their chunkiest and most guttural.

As a live band, Kylesa doesn’t always allow the dreamier, post-punk-influenced side of their music to come through as strongly, and that’s understandable. Sometimes an audience just needs a good rocking, and Kylesa can provide that. But since 2010’s Spiral Shadow, they’ve been pushing toward a subtler approach, made all the more explicit via the more ethereal, dark Ultraviolet in 2013. With new album Exhausting Fire, however, they strike a much more comfortable balance. There’s seemingly more space in these ten songs, yet the band sounds reenergized after delving into Ultraviolet‘s gothic strains. There’s more riff ‘n’ boogie here, but not exclusively so, and with a natural flow between its most visceral and its most abstract moments.

The first track on Exhausting Fire is called “Crusher,” as if to send the message that Kylesa’s still intent on creating something that’ll leave a mark, but it’s not the kind of crusher that the band would have once employed so aggressively, like a Louisville Slugger to the torso. It’s more like Siouxsie and the Banshees gone sludge, Laura Pleasants’ voice melodic and steeped in reverb. It’s dense, as is the song that follows, “Inward Debate,” but not necessarily so aggressive. These are loud, mighty songs, but they allure rather than throttle. And more than ever, they’re actually kind of weird. The riffs in “Night Drive” veer off into some unpredictable places, but only after a deep Moog gurgle paints a dystopic backdrop for this psychedelic joyride. And “Falling” comes across almost like a heavy version of the Cocteau Twins, which is an idea that works well in Kylesa’s hands, thanks in large part to a stronger vocal performance than ever from Pleasants.

If Exhausting Fire adds more fodder for live-show hits—and it almost certainly does—”Shaping the Southern Sky” is at the top of that list. It’s the longest song here, but also the catchiest by a mammoth-sized margin. Sonically, it’s colossal, but the southern-rock boogie behind it makes it accessible and direct. The band actually kind of sounds like they’re having fun, which is an encouraging counterpoint to their more cerebral or aggressive moments. And there’s a similar sense of immediacy to album closer “Out of My Mind,” albeit without as much rhythmic swing. After an album so mired in darkness and sorrow, Kylesa’s reclaimed their badass sensibility and seem to be enjoying where it’s taking them. Lord knows I certainly am.

Shadow of the Horns: A salute to Kylesa

Listen to new Kylesa song, “Shaping Up the Southern Sky”