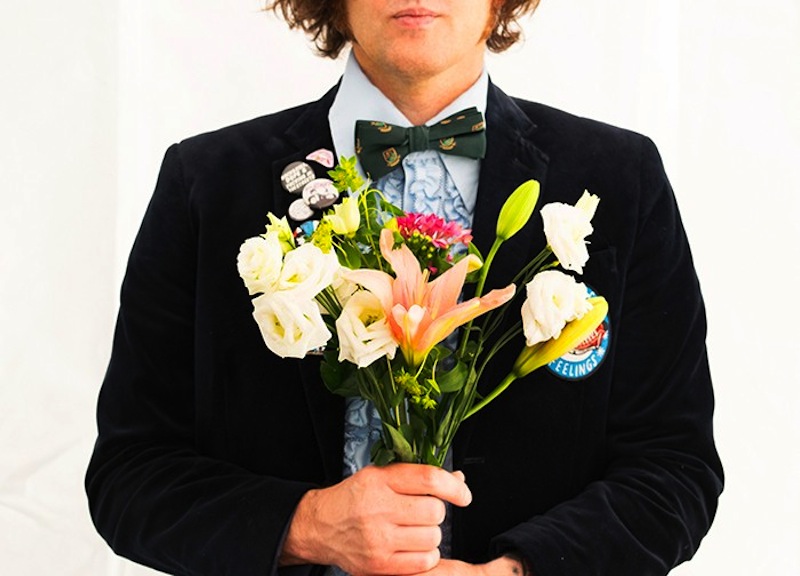 “I’m not interested in posturing and pretentiousness and feigning an image—I’m more like, ‘Let’s just drill through that and connect.’ And i think the surest point from A to B is being honest and genuine and not making people have to guess who you are and what you really think and believe and feel.”

James Alex tells me this early in our conversation, the Skype connection doing its level best to obscure some of his words but thankfully failing. The frontman of Beach Slang is on the road, as he and his band have been for much of the past two years, currently between headed to Austin, Texas from Oklahoma City.

“Honest and genuine” could be an alternate—albeit too obvious—subtitle for Beach Slang. Every album and EP the Philadelphia punk band has released is a paragon of earnestness and emotional honesty. They are works written in the language of unabashed sincerity, expressed in bright, dynamic riffs and relentless rhythms and high-wire choruses with bold, big-hearted lyrics. The chorus of “Spin The Dial,” from Beach Slang’s latest full-length A Loud Bash of Teenage Feelings (whose title tells you plenty about the band’s overall aesthetic) is a perfect example: “We stumble out or try/Loud and free, raw and wild/And feel alive.”

There is a prevailing temptation, in much of our current pop-cultural discourse, to be wary of someone or something as thoroughly guileless and forthright as Alex and the music his band makes. This jadedness and quick-draw sarcasm is somewhat understandable as a reaction to fraudulent art being pushed on listeners by major labels (or, as is sometimes the case, ostensibly “indie” online media) as well, but it can also dull the ability to embrace music that’s unafraid to traffic in larger-than-life pronouncements and emotions and occasionally sound awkward but never untruthful. With this in mind, I’ve just asked Alex if his writing is in conscious opposition to that irony-centric attitude, but he rejects this.

“The people who connect with this band are who I care about and who I write for,” he responds. “Whether that audience stays small or grows, I’m comfortable with that. I simply don’t care about making this into something to please cool-hunters or tastemakers.” 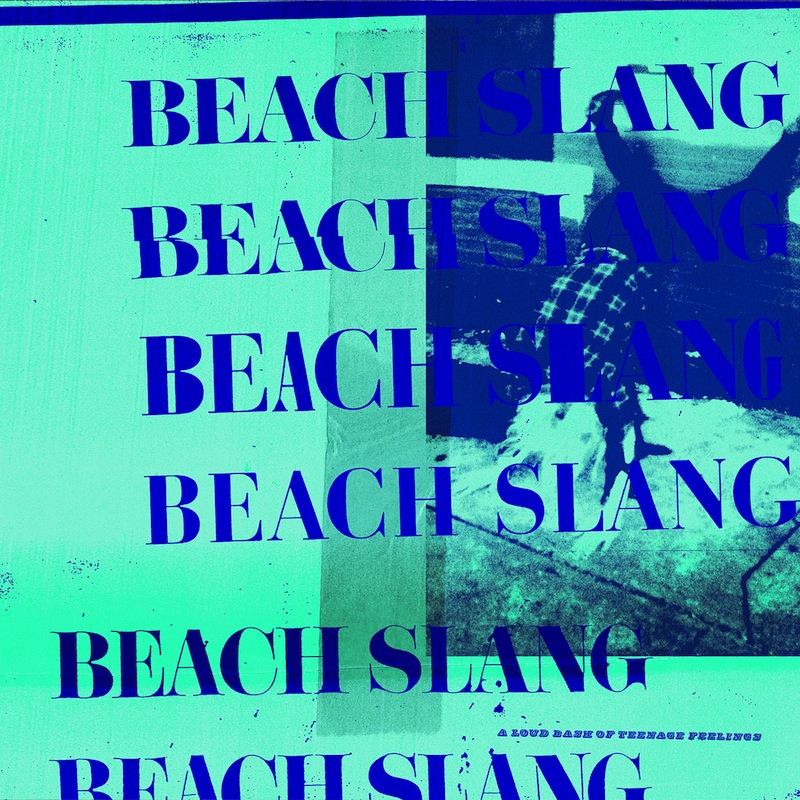 Teenage Feelings comes less than a calendar year after Beach Slang’s debut album, The Things We Do To Find People Who Feel Like Us. As it’s also 10 tracks long and about the same half-hour length, it functions as something of a more desperate, immediate twin to The Things We Do; the Darkness on the Edge of Town to the first album’s Born to Run. (Alex appreciates this analogy, which should lead me to self-congratulate but instead has me wondering what our current cultural attitude would make of Springsteen if he was releasing albums like that now for the first time). Its sound is closer to the punk spectrum of Beach Slang’s influences than the pop side, as is blatantly obvious on songs like “Atom Bomb,” “Young Hearts,” “Art Damage” and “Warpaint.” Alex calls the sonics “a byproduct of touring”—a more urgent tempo dictated by trying to emulate their live sound.

Stories heard and experienced on tour also informed the album’s thematic and lyrical content, but perhaps more than anything else Alex attributes it to thoughts about “the process of dying…making the days count before that happens”—kick-started by the birth of his son. “I remember holding him and one of the first things I said to him was, ‘So you’re my replacement on earth, huh?’” He states that he wasn’t feeling particularly angry or depressed while writing and recording Teenage Feelings, but thoughts of mortality’s heaviness are hard on the shoulders even when not in conjunction with other negative emotions. That weight is readily evident in every note of the record, even when the songs are soaring.

Despite being, at 42, quite removed from his adolescence and the early fumblings of adulthood, Alex remains focused on these years and experiences as the central focus of his songs because, he claims, they saved his life. While he describes himself as “a real introverted quiet clumsy kid, just awkward as all hell,” with a small but dedicated group of like-minded friends, he says he wouldn’t have wanted to grow up any other way.

“If I’d been a popular kid going to like, parties and football games, the experiences would on a surface level seem fun but ultimately be shallow,” he explains.

As a teenager spending the school year in the suburbs of Philadelphia and summers in New England, visiting the latter had a particularly galvanizing effect—smashing his whole head open, as Alex puts it.

“I had uncles there who had great record collections and went to DIY shows, were friends with guys in Verbal Assault,” he says. “I saw older folks skating halfpipes and listened to Flipper and Circle Jerks. I felt welcomed into this secret club…whereas in my high school in PA there were like 3 punks. To me I was around punk rock royalty.”

A Loud Bash of Teenage Feelings would be the likely title if there was ever a Beach Slang movie, and summarizes the spirit of what Alex is referring to. You can hear that proud communal spirit, with hearts on sleeves and thoughts shouted at the top of lungs, in every song the band has released. At times, this may some melodramatic to certain ears, as on this “Wasted Daze of Youth” lyric: “Carve ‘I want you’ in my arm/Cover up my sins with truth.” But James Alex believes fully in every word he’s sung; there’s no cynicism involved in his evocation of these emotions. If those or other Beach Slang lyrics seem overcooked to you, try your best to summon memories of how you felt at the ages of these songs’ narrators. I’ll bet the sensation of your first loves—and the way you screamed along to your favorite songs and the anarchic floating glee of being wasted with friends and the crush of losing a friend or lover—didn’t feel melodramatic at the time. And it feels real in these songs.

No song on the album feels as real as “Warpaint.” Written in support of a friend of Alex’s who attempted suicide, the lyrics are stark and gutting as opposed to the bright, broad images of many Beach Slang tracks. “Knock the pills out of your teeth/The way they’re kissing you gives me the creeps/Make a fist and ditch your doubts/I know you’ll die sometime, but it’s not now.”

“I just wanted to do right by her,” he explains, emotion rising in his voice. “Wanted to maybe, make sure that when she heard it, maybe if she’s ever on the ledge again that’ll be the thing that holds her back and makes her stick around.”

This leads me to ask Alex if he views himself as a survivor’s’ advocate, the answer to which is an emphatic yes. For him it’s about much more than putting these ideas of hope found through painful catharsis into music, though: Alex has given out his phone number and email address when talking to fans, including shouting it from the stage, and has conversed with fans as a result. “I’m backing it up in real life,” he tells me. “If you’re on the ledge, write me or call me and we’re gonna talk each other down.” As for specific suicide prevention and mental health advocacy efforts, Alex explains that he would like to be more involved but that a significant block of time away from the touring/recording whirlwind would be necessary for him to treat the issue with the severity and dedication it requires and “smudge the stigma” away from mental illness.

“Human flaws are beautiful things too, and we don’t need to be ashamed of them.”

The period before, during and after Teenage Feelings’ recording has been immensely tumultuous for Beach Slang: The band went through an April 29 onstage tete-a-tete that was immediately reported as an “onstage breakup” (it wasn’t), but then lost founder and drummer JP Flexner to an amicable creative departure in July and fired lead guitarist Ruben Gallego amid allegations of a past sexual assault. The band’s official statement on the latter is impossible to misinterpret: “For us, Beach Slang has always been and will always be a safe space for everyone.”

Many bands would either take on short-order replacements to finish out a tour or cancel the dates and refund. Either would’ve been understandable under the circumstances. Instead, Alex opted to play the remaining shows as solo acoustic affairs, crediting his appearance on NPR Tiny Desk Concerts last year with inspiring the idea.

Comparing the dynamics of the solo show vs. the full band experience, Alex says, “It gives a different weight to the lyrics…The [acoustic] shows feel equally heavy and emotional and have all the stuff that I love about them, just [presented] in a different way. People have been incredibly sweet on this tour; I’ve been describing shows as like, getting a several-hundred-person hug all at once.”

He clarifies that the more intimate nature of these concerts and the fan interactions surrounding them allowed him to discuss everything that’d happened with the band in the most upfront way possible. “To cancel the tour would’ve felt deceiving,” Alex says, explaining his determination to keep it going in forthright terms but then offsets this with a wry statement and a chuckle: “I guess I’m just not wired that way. Too dumb to give up, man.”

The form Beach Slang will take for its next iteration isn’t yet clear. Alex has made no specific announcements, but shows are already scheduled in Europe for January 2017, so we’ll know soon enough. (A continuation of the solo performances seems improbable—Alex refers to them in terms referencing their ephemeral nature, as if they’re experiments unlikely to be repeated.)

What cannot be doubted at all is James Alex’s commitment to his punk ethics of communal support and open-heartedness, as well as his desire to make anthems that cover the full spectrum of experiences for the weird and wild youths so similar to his younger self, despite knowing that he may never break out of that audience.