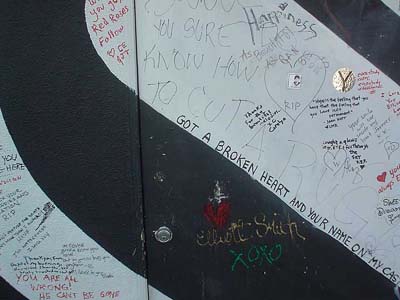 Hello, Treble readers. I would like to welcome you to our fine web publication, one that I hope will offer lots of insight into the world of music and those who listen to it. And I also hope it entertains you, for nothing’s less fun than criticism that takes itself too seriously.

As editor, and pop culture geek, I plan on writing every week about the “finer things in life,” if you couldn’t already tell by the title. I was going to start this week with a rave about how much I love singles, but I think, instead, I will focus on one single in particular.

As most of you may know, Elliott Smith died recently, devastating friends, family and fans. I, along with many other Treble contributors, was crushed. I never expected to hear such terrible news so soon. For days I could barely keep myself composed.

No less than a week later, I found myself living in a county surrounded by flames. Literally. A good portion of San Diego county was on fire as I started to write this, and though I am not currently in any immediate danger, that wasn’t as apparent when my apartment smelled like an ashtray. And for the record, I don’t smoke.

I watched the news all night, checking to see how close the fire was to my home. There were signs that it was getting closer, and I figured I had to decide what was to come with me, in the worst-case scenario that I had to evacuate.

Well, photos, obviously, would be the first thing. My guitar. Some clothes. And my seven-inches.

Now, I’m not so material that I would grab any luxury I could, but my seven-inches are a different story. Some of them are extremely rare, and almost impossible to replace. Not the least important of which is Elliott Smith’s last single, “Pretty (Ugly Before).” “Pretty” is far from the most rare single in my collection, but its print run was limited to 5,000, making it a harder to find item than, say, XTC’s “Mayor of Simpleton.” Regardless, it had sentimental value, in addition to being host to two of the finest songs of Smith’s career.

The a-side, “Pretty (Ugly Before)” was a fan favorite at shows for a couple years. Elliott played this song at three of the four shows of his I had attended, two of which saw Elliott backed by some emo fly girls. On record, it’s a full-band arrangement, not unlike some of the more “rock” oriented songs on Figure 8 or XO.

The b-side, however, titled “A Distorted Reality is Now a Necessity to Be Free,” ranks among the best of Smith’s recordings. It starts with a repetitive keyboard riff before Elliott’s voice joins in, accompanied by some distorted organ chords. The song builds into a densely layered arrangement of guitars, voice, keyboards and drums, the combination of which amounts to a song sounding like the work of six or seven musicians, rather than one guy with a four-track.

These two songs were a gateway into what would have been Smith’s sixth album. We may still see the release of said album, but at the time of his death, it was still in need of a few finishing touches. When it comes out, it’s likely to stay how it is, like Sketches for My Sweetheart the Drunk, Jeff Buckley’s incomplete second album.

After I first got my hands on “Pretty,” I played it all the time, reminding myself of how kickass a songwriter Elliott Smith is. I was psyched that he was going to be releasing a new album. “Reality” filled me with an overwhelming sense of joy whenever I heard it. It had a one-of-a-kind sound that displayed Smith’s diverse tastes and abilities.

Yet, hearing it now doesn’t give me that same feeling. It’s still an amazing song. I still can’t stop listening to it. But the joy has been replaced with a sense of emptiness. After album number six comes out, that’s it. We’ll never hear from him again. Certainly he left us five fantastic albums, and no doubt the one he was working on will be outstanding. But it still hurts.

I’m one of the people who preferred listening to Smith’s music after he died than not listening to it. He gave us this incredible gift and dammit, we should accept it and not cast it aside because he left us too early. Though it may be hard for some, not listening is ultimately more heartbreaking.

But at least he gave us one last seven-inch. And the next time I see flames out my window, it’ll be packed up in my car, ready to be played at my turntable-ready hideaway.