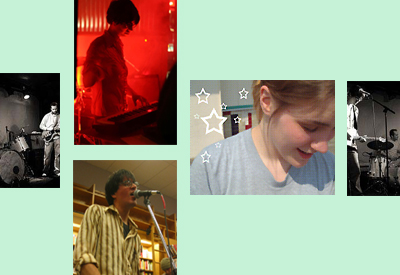 It’s the second week of 2005 and you’re ready for new music. The release date pages on all your regular webzine stops are taunting you with far-off release dates for the new Trail of Dead and Bright Eyes albums. And God only knows if that Beck album is ever coming out. But that doesn’t mean that there isn’t an abundance of good, new music. There’s a plethora of great bands that you may not have heard of, but should definitely give a chance. And whittling it down from the thousands of unheard indie bands out there sure isn’t easy.

So, to do our part to introduce you to new, exciting music, we’ve come up with five artists that deserve your ears’ attention. Among our choices are a dark, shoegazer band from San Diego, a New Jersey singer-songwriter, one band from Salem, Oregon and one from Seattle (one that plays power-pop and the other, “space tundra”) and a dream pop band from New York. We’ve included links to their websites, our reviews of their records and a few mp3s if you should happen to require an immediate listen. You won’t be disappointed.

LowCloudCover
“LowCloudCover’s music is murky and dense, heavy with layers of effects, melding into a thick stew of sound.”
Read review
Website
Listen to “Menace”

Easterly
“Easterly’s songs are, like so many other good songs, drenched in reality and sadness.”
Read review of Easterly’s self-titled album
Website

Argentine
“Throughout (In Other Fictions), songs range from whisper-soft to sonically huge, as the band flexes their musical dynamics.”
Read review of In Other Fictions
Website
Listen to “Slumberside”

Wesafari
“Wesafari plays what seems to be called `space tundra’, a mix of acoustic and electronic elements that is ethereal and room-filling.”
Read Review of their promotional preview
Website

Jenny Owen Youngs
“Youngs has a theatricality about her that finds her fitting in comfortably alongside newer eccentric songwriters like Jolie Holland and Nellie McKay.”
Read review of The Scrappy Demo
Website

Oh, yeah, and these guys are pretty good too…

Argentine : In Other Fictions