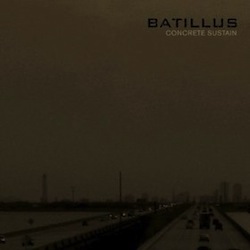 It’s not very often that you’ll hear a doom metal band described as having “swagger.” It’s essentially that way by design — sex appeal doesn’t come that easy amid noxious clouds of marijuana smoke, death’s heads and mournful bleakness. Which isn’t to say it never happens; “Supernaut” from Black Sabbath’s Vol. 4 is the rare exception that proves the rule. But on “Concrete,” the leadoff track from Batillus‘ Concrete Sustain, there it is, right off the bat: Swagger. It swings and it sways. It’s in the pocket. It straight-up fucking grooves, man.

In fact, groove comes pretty naturally to Brooklyn’s Batillus, named for a French supertanker. Across the six songs on their Sanford Parker-produced second album, Concrete Sustain, the group delivers a steady creep of crushing guttural doom, with just enough room to breathe and get a little flexible. “Concrete” is the most obvious example of this, which hits a sweet spot nice and early with a catchy four-chord riff, but achieves an atypical limberness thanks to the nimble beats of drummer Geoff Summers. Yet Batillus can hold their own with a funereal slab of classic doom for doom’s sake, as they do on “Beset.” And there’s an atmospheric, synth-laden intro fake-out to “Mirrors,” but it comes and goes quickly, with the bark of frontman Fade Kainer signaling a return to the group’s hip-swaying sludge in short order.

Yet nowhere on Concrete Sustain does the funk ingratiate itself into Batillus’ meaty assault as it does on “Rust,” a standout track that pulls the classic Helmet trick of being able to provoke moshing and head nodding in equal measure. Suffice it to say, Batillus isn’t all that interested in upholding doom tradition, which is perfectly fine. Their sound is plenty massive and formidable, but it’s that extra ingredient that makes it all their own — swagger.