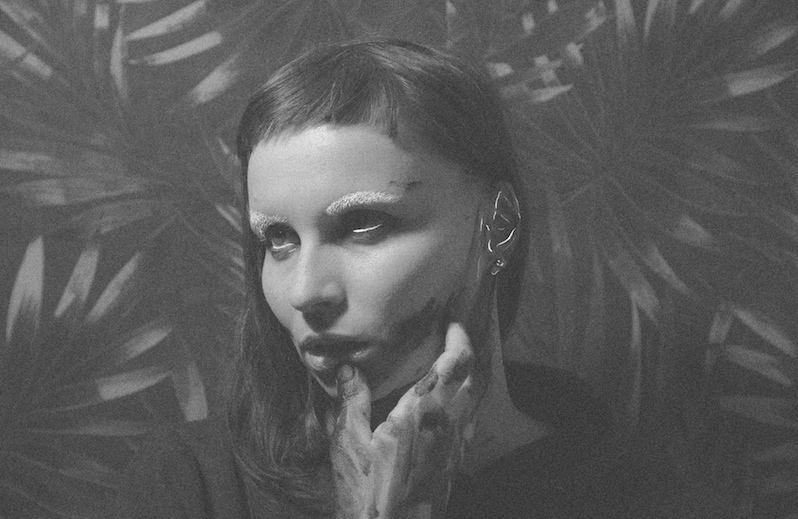 Nothing sounds out of the ordinary from the other side of the Atlantic, but outside her home in western Ireland, it’s stormy. Heavy rains are coming down, and strong winds blow outside, providing something of a noisy distraction from an otherwise pleasant conversation. It’s enough to interrupt her train of thought.

This feels oddly appropriate given the kind of industrial-tinged gothic folk music that Woods creates. In 2018, she released her solo debut Colt, more than a decade after the breakup of her previous band, JJ72. That album, while dark, existed in a more spacious realm, incorporating traces of darkwave and dream pop into gauzy folk dirges. Its follow-up, Birthmarks—out next week via Sacred Bones—carries a greater degree of visceral terror and thorny textures. It feels apocalyptic, even as the circumstances in which it was written were anything but.

During the two-year process of writing Birthmarks, Woods was pregnant. And parallel this phase of her life and career, she began to explore a concept she describes as the “birthing of the self,” a kind of process of participatory self-realization. Now in her late thirties, with two children and a life balancing both family and artistic pursuit, Woods finds herself in a much different place than when she was a teenager heading out on tour for the first time. And she took her time exploring it.

“Things arise in you, and dreams, that you want to articulate and make and create,” she says. “The process of traveling into those things and into a sense of purpose and meaning in one’s life, I suppose that comes at a cost sometimes, to whoever’s making it. They were the feelings behind the record, and in terms of creating a life for oneself and what you want to do and persevering in order to live a creative life.”

On Birthmarks, Woods collaborated with Norwegian noise artist Lasse Marhaug, whose ominous and intense textures lend a more harrowing counterpoint to her eerily melodic songwriting. The album is, to put it simply, stormy. Marhaug’s influence is often subtle—many of these songs are airy and spectral, more hints of something menacing than an outright threat. But the noise more often than not bubbles up to the surface, sometimes coloring a song more intensely, like in the album’s first single, “Tongues of Wild Boar,” or the sax-and-distortion industrial jazz drone of “Mud and Stones.”

This elegant balance of harshness with more delicate sounds, like guitar or cello or Woods’ own obscured vocal tracks, sets it apart from its predecessor. It wasn’t, initially, a conscious effort to reconcile the two extremes. But as Woods and Marhaug came to construct the elements of the album, certain sounds simply fit together effortlessly.

“Going into this record, I knew there would be contrasting elements, but I wasn’t going to try and rein them all into one particular sound,” she says. “I just felt that there were other threads on the record that gave it continuity and held it together as a whole. I didn’t shy away from going toward both extremes. It feels more like a journey in a way.”

In describing the aesthetics she was drawn to, Woods specifically points to visual art, specifically that of painter Francis Bacon and photographer Francesca Woodman, informed her own artistic direction. “Myself and Lasse both spoke about visual art in the process of recording, the textures we both liked in postwar Japanese photography and almost that foggy dense, large grain,” she says. “In visual art like that, you can almost hear it—it’s very noisy.”

Even as the “birthing of self” that Woods describes has brought her to one of her most intense and chaotic sets of music to date, she finds herself drawn to a less frantic and fast-paced lifestyle. Having toured the world at 20 years old and then becoming a mother shortly after the band came to an end, her route back to making music wasn’t an immediate one. She found herself making DIY home recordings—not her home, specifically, but an abandoned apartment building—and found a pace and flexibility through which making music again was not only appealing but practical.

To add to that more practical method of making music, Woods doesn’t embark on big tours anymore. Which she says is much better for the life that she lives now.

“I don’t think I’m cut out for a lot of touring,” she says. “I enjoy selecting dates, and just quality over quantity basically. So the priority is to feel like I’m advancing my own creative life at home.”

Woods has changed, as much as anyone does over the course of 20 years, but so has the landscape of music business itself since she first began releasing music in the late ’90s. She wasn’t totally comfortable with it then, but that was before the industry grew more turbulent and the bottom fell out—physical media being replaced by streaming, corporate consolidation, and a business model determined by algorithm. It can feel bleak, but Woods holds on to something precious amid all of this: freedom.

“The band I was in as a teenager, it felt very much like we were part of the music industry, but it didn’t start out like that,” she says. “We were just three kids in a garage, but you could feel the cogs of the industry. Whereas now, I’m making music, but I don’t feel, sort of, pushed around by anybody. That’s just my own personal experience. I’m not really interested in the industry side of things, because the more I read about it the more depressing it gets.”

As deeply as Hilary Woods is inclined to dive into the more sinister aspects of sound or depicting a personal breakthrough as something harrowing, there’s a positivity and generosity that’s at the heart of everything she does. These are personal explorations, and sometimes intense experiences, but ultimately, they’re a gift. As a musician and an artist, and someone who has spent much of her life being nourished by that art, Woods simply wants to reciprocate.

“It’s just relaying feeling in some form,” she says. “I’m giving back what art has given to me.”