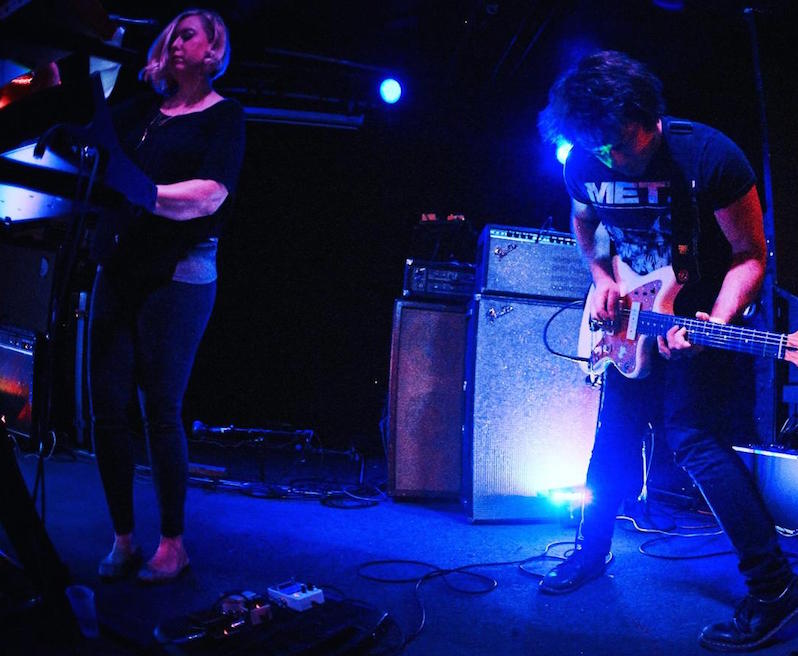 The Holy Circle aren’t the kind of band to wear out their welcome. The band—comprising Erica Burgner-Hannum, Terence Hannum (also of dark ambient/black metal outfit Locrian) and Rob Savillo—craft stunning dream-pop and shoegaze anthems (or in their words, “mom rock for goths”) that feel at once novel and familiar, and sometimes fade away just soon enough to give the impression of being something of a pleasant daydream. “Moorland Loneliness,” for instance, arrives and glimmers long enough to create a rush of endorphins. But the pleasantly surreal opener of the band’s latest EP, Sick With Love, is just a brief introduction to what’s ultimately a set of rich textures and sounds.

Released earlier this month via Deathbomb Arc, Sick With Love has hints of the sonic chaos of Hannum’s other band, but every noise-ridden texture and effect is packaged into a listening experience that’s intended to be more sensorially indulgent. A word that comes up often about the band’s music is “romantic,” which the trio freely embrace. But much of that sense of poetic, gothic romance is drawn from literary inspirations as much as musical ones, as Burgner-Hannum says when describing how she began writing “Lovely One.”

“I had been thinking about the metaphor that Mr. Rochester drew in Charlotte Bronte’s Jane Eyre, comparing his connection to Jane to a string tied between his ribcage and her own,” says Burgner-Hannum. “The novel became the source material for the subsequent songs. I wrote lyrics from the perspective of both Jane and Bertha, taking a revisionist view of her story as someone not initially mad but driven to madness by neglect.

“The characters became the vehicle for exploring my own experiences of vulnerability, ego, mania, and an insatiable need for love,” she continues. “The music Terence, Rob, and I were writing was, sonically, dark and romantic, while noisy and frayed around the edges which partnered perfectly with the source material.”

We spoke to the trio about the conceptual threads that run through the album, the allure of romance and embracing “mom rock.”

Treble: Given that the album is written with heavy inspiration from Jane Eyre, but not a “synth-pop opera” as you called it, would you call this a concept record?

Erica Burgner-Hannum: I suppose it became a concept album in the end, but wasn’t our intention when we recorded. We were just trying to put a demo together of our new music since our self-titled LP. As we were listening to the recordings and deciding what worked and what didn’t, it became more apparent that the songs we were keeping followed a common narrative from my Bronte-inspired lyrics but, at the same time, were sonically diverse. We wrote “Mooreland Loneliness” and “Midnight Hush” in studio and wanted to repeat the concepts in those two songs in more interludes throughout a larger record but decided to stop writing. The end result was concise but felt right.

Terence Hannum: First off, I love concept albums. Lamb Lies Down on Broadway, Operation: Mindcrime, come on—love that stuff. I love a record that feels seamless, and when a band plays songs seamlessly live. I hate stage banter, it’s never interesting. So to me, yeah it’s a concept record, in that it is considered, we blend between tracks and fades and crossfades. We wanted certain tracks to go before others and have it be intentional and we found a narrative core even though Sick With Love started kind of as a necessity to make a demo.

Treble: “Romantic” is a word you used to describe some of the music. What draws you to this as a musical quality or mood?

EBH: Romance is both a beautiful and dark aesthetic. You have to become vulnerable to experience love and being hurt and heartbroken often goes with the territory. There’s infinite songwriting that stems from those experiences.

Rob Savillo: It’s strange because I’ve typically only played in punk or hardcore bands, but I connect with the idea that romance is to make yourself vulnerable. I hope that vulnerability comes through in the songwriting as playing with Holy Circle has been an experience outside my usual comfort zone. And I appreciate that discomfort—it’s how I can push myself further.

TH: I think of like the New Romantic music of like A Flock of Seagulls or Japan, where the music is dramatic, thematic and incredibly grandiose. I am a collector of a lot of that stuff and I enjoy that mood quite a bit though I don’t want to copy it. But also, I think of how really interested I am in how the writers of the Romantic era incorporated gothic and horror stories—so for me it fits musically and literally into a specific mood.

Treble: Does the music inform the lyrics or vice versa? Both?

EBH: I have an ongoing catalog in my head of lyric ideas. Something inspires me and I make note. Usually what happens is Terence or Rob write a riff and I record it. I listen to it on my own and think about whether any of my ideas will go along with it. That’s usually the key to me getting excited about something they’ve written is that spark and connection to an idea I’ve been mulling over.

RS: When I’m writing guitar parts, my first instinct is always about the feel and tone. Since Erica writes the lyrics, she lets me and Terence know when we’re overindulging that instinct and helps us reign that in to fit what’s in her head lyrically.

TH: I mean we tend to write dark tunes. So the palette is kind of there, and we’ll jam on some ideas and then start to shape it so it really is mainly the music and mood before lyrics. 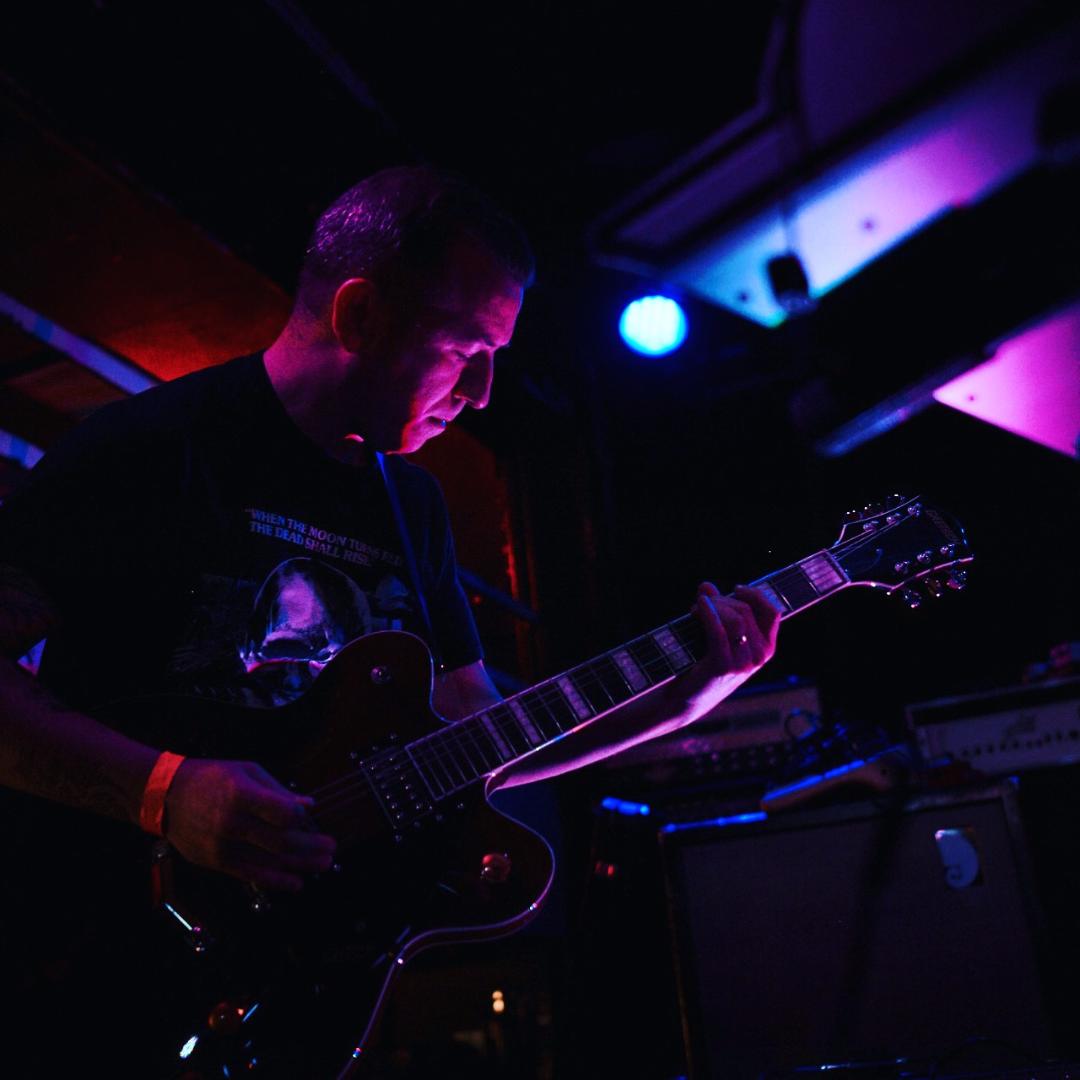 Treble: The feel of the album has a particular mood and kind of attractive gloom about it. Does it help to have certain surroundings or environment when writing? Or does what comes out just come out?

EBH: I’m in my head a lot when I’m in writing mode and need a lot of solitude but that could be on my long commute to work or late nights in my living room. There is a lot of autobiography in my lyrics and I spent time connecting to past experiences and emotions as I wrote and connected that to the mood and aesthetic of Jane Eyre. I will often write and record sound samples to listen back to while in an inspiring environment which was the case with Sick With Love.

RS: I can be anywhere or doing anything when I hear something in my head that I want to translate later to guitar, but listening to other music is probably my biggest inspiration when I’m writing. I was discovering a lot of new, to me, music that fit what I thought Holy Circle were going for. And I wanted to push myself beyond what I thought I was capable of playing. Bouncing ideas back and forth is also a large part of my process—nothing too mysterious here. A lot of stuff gets left on the cutting room floor, so to speak, and songs evolve over time. Even the songs on the EP are still evolving to some extent as we decide to add or subtract or change parts we don’t like as much anymore.

TH: We definitely set out to evoke a certain sense of melancholy, we wanted to write sad songs. There was definitely the intention, but…we don’t lock ourselves in a pain dungeon and don’t look at any light—I always feel as if that is so unrealistic to maintain. In some ways I think being in a band and making this music is like a way to transcend the normal everyday life—we all have jobs, kids and obligations, it’s kind of nice to have a focus that is like gloomy and creative as a pressure valve.

Treble: “Free and Young” is obviously a new song, but it has a kind of anthemic feel of something familiar. Is the balance of accessibility/melody and pushing into new territory one you’re conscious of? Or is it more a matter of just following where the song takes you?

EBH: The answer is it’s both. We have a lot of references when we’re writing so we are intentional but I think the three of us also follow our instincts and what feels right.

RS: I don’t think I’m necessarily conscious of that balance; although, I’d like to think that I helped push Holy Circle into new territory! At first, I held back somewhat, but at some point I just thought, “fuck it, I’m kicking on the fuzz,” and it worked.

TH: I think, for us, it is new territory, thanks Rob. Our last record had no guitars and was very synth driven but had live drums. I love “Free and Young” because it kind of breaks with that, with two guitars and synths and holds this line between maybe shoe gaze and synth pop. I like that, we’ve come to embrace the situation.

TH: I accept it, Erica IS a mom. And, hey its better than Dad-Rock. However, I have no idea what genres I do anything in although I heard “mom-rock” is the new “pigfuck”. Just sayin’.

The Holy Circle are on tour now. See their dates here.