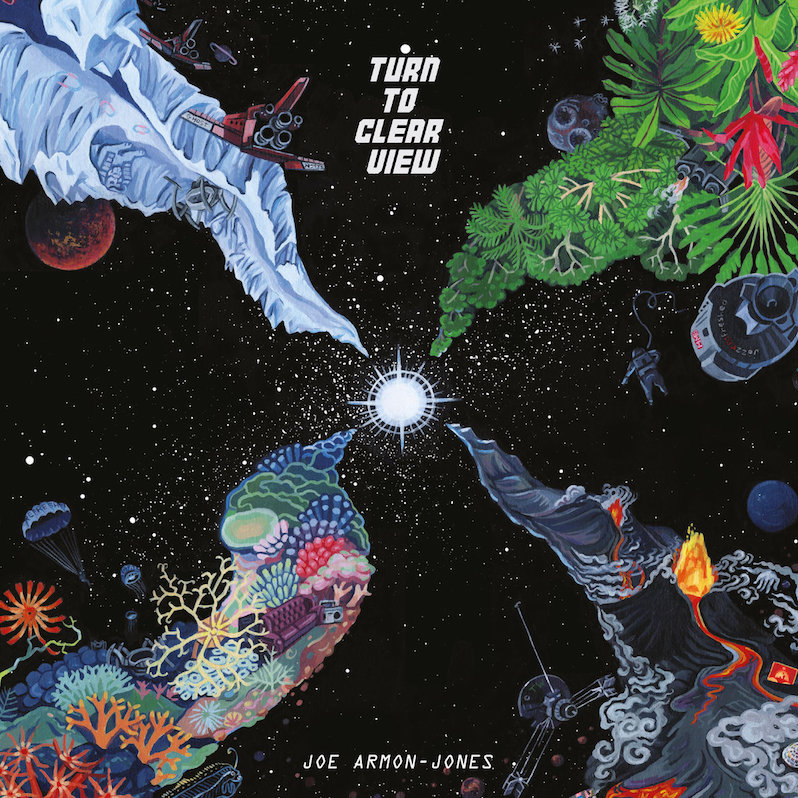 For my money, the proper listening situation for Turn To Clear View, the eight-track, bass-heavy follow-up to London keyboardist Joe Armon-Jones’ 2018 début Starting Today is an intimate house party with your mates. Damn skippy. Boisterous, joyful confusion running with your best folks gives this record its proper maze-like ebb and flow sensibility. You can pop in and out, catch up where you left off and still keep weaving about many more conversations that stretch into the wee hours.

Don’t be confused—Joe Armon-Jones makes serious music that is far from disposable. His polymorphic mix of dub, hip-hop, R&B, funk, and bass-heavy UK club culture is the amalgamation, co-produced by housemate Maxwell Owin, that can be savored wherever the ears are at. And that’s the point. In Stanley Nelson’s new Miles Davis documentary Birth of The Cool, critic Greg Tate puts forth the notion, rightly so, the “spookily hypnotic funk-rock fusion” Davis made in the early 1970s helped set the table for what was ahead, from House music to R&B. Joe Armon-Jones plays in, out and around that tradition too.

Turn To Clear View adheres to what “his folks” are here for. Not some narrow-minded, dusty old head tradition, isolated on a shelf, where others can’t reach it on first listen. His arrangements are the galvanized British jazz scene happening now. That 2018 début put his talents as a pianist and soulful modern arranger upfront not just for the UK underground jazz-scene to applaud, but for a global look-see as well. In addition to solo endeavors, Jones holds down duties in Ezra Collective and in outfits led by Nubya Garcia and Moses Boyd—all key players in this new landscape.

Turn To Clear View returns with a formula of alliance among the upstarts, continuing the multi-genre approach. Where “Starting Today” radiated with feverish energy and verve in certain spots, this follow-up lets up a little on the gas, allowing things to settle in, and get felt. That significant increased swing draws us closer after repeat listening, out of fear of missing out on some off-record dap session. From the off the cuff moments shared among band members between selections to the dense audio environment dripping throughout the entire record, it’s a rich text. “Try Walk With Me” featuring Asheber starts that opaque sensation of slowly moving through the ocean. Itʻs the reserved shuffle of Boyd’s drums and gentle bass work of Mrakpor that casts a drowsy spell.

“Gnawa Sweet” loads the mix with skippy back and front-loaded tempo pulls while Jones charges the dub-wise energy with heady-flexible keyboard passes, that run like water. The horn lines keeps dream-like sensations afloat with accompanying sunny day charts. There is a cooker of a moment on the trad-jazz feeling of “You Didn’t Care” where Nubya Garcia, the feature here, stretches out on sax, getting atonal, piercing, honking and hawking with her busy timbre. And Boyd works those drums furiously, throttling the arrangement, finding those inner rhythms and giving the track large room energy, sticking in your gut for a while after. We get a jazz/hip-hop moment on the inviting then lethal “The Leo & Aquarius” which features Jehst who steps up mid-song and posts, no question, emcee dart bars like bail.

But it’s “Yellow Dandelion,” a five-minute head-nodding swinger of a jam featuring Los Angeles vocalist and producer Georgia Anne Muldrow, acknowledging the UK jazz scene with a co-signing of sorts. Turning in a reserved, but spirited vocal performance where she opens up, blows and scats behind the looping heft and swing of a band executing at peak status. Singing in code about how we as humans lack the tolerance for difference, using that flower as a pointed metaphor, Muldrow sounds regal. It’s that combo, a tight and loose oblong moment, that bands yearn for. It’s unconscious. This connectivity between LA and London? Don’t sleep on it. Jones, meanwhile, runs through his magic bag of approaches delivering fusion, trad-jazz and funk licks during a solo, two minutes in, that one can envision him backing up Miles during that “spookily hypnotic funk-rock fusion” period. It goes down, just like that.

Similar Albums:
The Comet Is Coming –
Kamaal Williams –
Idris Ackamoor and the Pyramids –