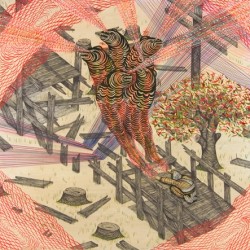 Rogue Wave frontman Zach Rogue’s musical career began after he lost his job and started writing music that fell into the hands of Sub Pop Records, resulting in Rogue Wave’s debut album Out of The Shadow. Frequent member changes since have failed to break Rogue’s spirit completely and drummer Patrick Spurgeon is the only member who has been with him since the beginning. Still, Rogue Wave has had their fare share of dispiriting bumps along their long journey. Spurgeon spent several years battling severe kidney failure and his story inspired a PBS documentary about his life and need of dialysis on the road while searching for a transplant. Their former bassist and friend, Evan Farrell was killed by a fire in his apartment shortly after going on to pursue a new project in 2007. To top everything off, Rogue awoke one morning in 2010 to find out he has two slipped discs in his neck rendering him temporarily paralyzed. They might be one of the unluckiest bands in indie rock, yet they have persevered and so will their music.

With a whole new band, Rogue and Spurgeon get back to the basics on new album Nightingale Floors with the kind of simplicity that made their first album an unexpected success. This is immediately apparent on second track “College,” a perfectly catchy pop song that reveals the band as ready to start a new chapter in their career. The following and appropriately titled “Figured it Out,” in which Rogue sings, “I know the end has come to pass, no words could cover it,” with Spurgeon & Co. building up to the first of many crescendos of crashing cymbals and kick-drum to an acoustic outro. Rogue’s revelation shines through, and the song ends up the best on the album.

The emotional energy and confidence coming from Rogue Wave in Nightingale Floors is infectious, and there are plenty of things to love about the album. Yet there’s an immediacy that’s lacking in a few spots, namely “Sirens” and “S(a)tan.” The first half of each song starts out a little too slow and redundant, but they both end up progressing significantly in their respective second halves, ending in a more satisfying place than they started.

Rogue Wave hasn’t released any new music since 2010, and they appear in fine form, adding some new up-beat and gentle indie rock, coated with deceptively depressing lyrics. The last two songs, “Without Pain” and “Everyone Wants To Be You” deliver an emotional finale. The former is a magnificent, two-minute melancholy acoustic jingle, while the latter sticks to a three-chord progression, giving Rogue a sound similar to an early incarnation of Death Cab for Cutie and closing with a final touch of a fading lo-fi distortion effect. Rogue Wave’s resilient attempt to get back to their original sound was somewhat of a success. While debut album Out of the Shadow still stands out as much more organic, their fifth album is a humble continuance of a group sticking to what they love and overcoming numerous obstacles along the way.

Built to Spill – You In Reverse