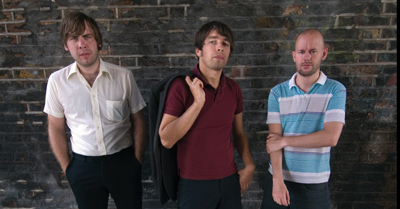 On a balmy Friday afternoon in December, I made my way across Barcelona to Sala Razzmatazz where I met up with Peter Morén, guitarist and primary vocalist of Stockholm’s Peter Björn and John. That night they were to play between GoodBooks and The Magic Numbers, Barcelona being the third of four stops in Spain as part of the annual Wintercase festival. In many ways, Morén was the ideal subject for an interview, not yet inured to the repetitious stock exchanges of questions and answers, his band on the cusp of mass critical and popular approval. That he, Björn Yttling and John Eriksson have all eclipsed that daunting end point, the age of thirty, gives them all the more levity on their current success.

In person Peter Morén is polite and thoughtful, slightly reserved though expansive when engaged by a topic which interests him. Primary among these, during our conversation, was songwriting—the mystery that shrouds the genesis of exceptional pop-songs, the vast plurality of the ways in which such songs come into existence. Writer’s Block, the trio’s latest release, is loaded with songs which, while different from one another, coalesce into one of last year’s most groovy albums of melancholia. They feel both fresh and unique, as well as part of a long lineage of remarkable song writing and production. If there is anything that unites many of the bands currently coming out of Scandinavia, it is probably this characteristic duality.

Though he shies away from grouping the current wave of Swedish bands into a scene—he contends they are much too different from one another to be shoved under the same umbrella because of nationality— Morén has described Peter Björn and John’s music as “Pop with the Bergman touch.” The description is apt. By associating his band with Sweden’s most iconic director, Ingmar Bergman, he highlights the somber undertones which add to the songs’ depth and dimension. Though, as he readily admits, Writer’s Block is overall a more positive affair than their previous album Falling Out. “Still, it’s not clichéd happiness,” he insisted. “We want to make it feel real because it’s not that you are happy all the time. It’s more…you feel okay and you feel you’ve gone through a crisis and it’s, kind of, okay, but you’re not dancing and laughing.”

The album is a document of change, of the capacity of human beings to immerse themselves in experience and come out again on the other side, sometimes, surprisingly, improved. According to Morén, it’s about “moving on to new places and new persons and getting older and liking it…maturing and feeling this is better actually.”

This mentality is most directly reflected in the Morén penned “Objects of My Affection”. The song is a rejection of the nostalgic platitude that we are more alive when we are young. At one point he observes, “Life has a certain ability of breathing new life into me / So I breathe it in.” If life instills in us, again and again, the desire for more life, it is then our choice to ignore the call to a continuance of exhilarating and complicating experience. In Morén’s version, as emotional life becomes both more complex and more direct (“I laugh more often now / I cry more often now.“), and the confusion of youth recedes, we become more ourselves (“I am more me”). What is joyful about Writer’s Block is that it affirms life again and again in the process of reflecting on problematic events and emotions from the past and present. “It’s all about relationships really and trying to figure out the people around you,” Morén told me. “And yourself?” I asked. “And yourself. You sing something about yourself but then you get emails.”

Not all of Peter Björn and John’s songs are as overtly grounded in particular personal experiences. The creation of “Young Folks,” the ubiquitous and infinitely appealing first single from Writer’s Block, is a perfect example of the way in which the band members collaborate. It began as a slow, jazzy piano piece which Björn Yttling had worked out, complete with melody. “The idea was to have a duet,” Morén explained. “So, me and Björn bounced dialogue between each other—`don’t you say like that when he says like that’—trying to set the scene of two people meeting in a bar or a club. Of course, you’ve been through things like that. It’s not totally personal, but of course you can understand.” About how the song came to have its particular, distinctive sound, he was less certain. Obviously, a primary factor was the unassailable decision to have Victoria Bergsman sing the female half of the duet. Beyond that it appears that, as is the case with many of their songs in final form, it was the result of the alchemical reaction of each member injecting it with his own temperament and ideas—that and the deftly precise production skills of Yttling. Oh, and at some point, someone started whistling, but do not expect a repeat in the near future. “You don’t want to become some sort of novelty act with the whistling and it can be a bit cartoonish,” Morén told me. “They go to the album and it’s kind of serious, kind of melancholic music.”

The whimsical video for “Young Folks”—a cartoon portraying a whistling lesson between a boy and girl, the effortless composition of a hit song and the subsequent party when they play it the first time for their friends—is a perfect match. It plays on the fact that sometimes bands even surprise themselves with the quality of the songs that they write. I was surprised to hear that they had no input into the subject matter of the video as it seemed to me a pretty good distillation of the attitude evinced by the band toward the song: a laid-back mixture of love and wonder. “We didn’t want to be in a video ourselves. We’re kind of tired of cliché rock band videos,” Morén explained, “and then we had decided that we wanted a painted cover and this guy he does cartoons and he’s really good at it.” The guy is
Graham Samuels, an English art student living in Stockholm. As for the boy and girl in the video and on the cover of the single, they came to existence through a chance encounter between the band and a book. “When we mixed one of the other songs in the studio, we found this book there from 1970 or something, which was like this Swedish instruction book: How to Record at Home,” Morén said. “And you have these two kids with a tape recorder in a photograph. So, he (Samuels) literally painted them from that picture…it’s some kids who are grown up now.”

Sometimes a song is born out of an affinity for the drum pattern in a Dionne Warwick song. Such is the case with “The Chills.” “`The Chills’ was John’s song. We really liked that drum pattern which is an old—it’s probably in other songs as well, but the one we heard was `You Can Have Him’ by Dionne Warwick,” Morén explained. “John wrote a melody around that riff and he and Björn recorded it without lyrics and vocals and I got to take it home. It sounds like The Chills, you know, `Pink Frost.’ So, I had the title and then wrote it from there, not about the band, but about the feeling that the song made me feel.”

“The Chills” was one of the high-points of Peter Björn and John’s live set. It was tenser than the album version, vibrating with barely-restrained paranoia, loosening and tightening as the band shifted the tempo. On stage, Peter Morén is constantly in motion, a contracted ball of energy, Jam-era Paul Weller style. In contrast, Yttling and Eriksson maintain a laid-back countenance, even when it comes time for them to step up to the microphone. “Start to Melt,” the only song on which John Eriksson sings lead vocals, was mesmerizing live, his soft, plangent voice couched in waves of bleary guitar. While “Young Folks” failed to match the euphoria of the recorded version, the bands noisier, more melancholic material sounded phenomenal, especially the final two songs, “Objects of My Affection” and “Up Against the Wall.” The latter, the closing number, was far more volatile, as well as longer, and imploded in Sonic Youth-like squalls of noise and a hemorrhaging guitar solo. In the end, nothing but sweet, intrusive feedback.

My interview with Peter Morén ended seated on some steps at the end of an alley, speaking about how among the band’s projects in the near future is an instrumental album. “We’re going to do three melodies over Christmas and then get together and just improvise, just to do something else,” he said. Also under consideration is a trilogy of very quickly made albums—the instrumental one—along with a folk album of sorts, and one that is more punk rock. In any case, they are looking to challenge themselves and move forward. “We always wanted to make a lot of records, but nobody really cared for them and we didn’t have any money,” Morén told me. “If we had this situation before we would have made more albums.”

When “Young Folks” was put up on My Space in December 2005, the band was without a record label. They made Writer’s Block with their own money and then shopped it around themselves, ending up on V2 Sweden, which released the album in May, and Wichita which distributed it throughout Europe in August. On February 6 it will finally be available in The United States on Almost Gold Recordings, a week after the band plays their first show on American soil at the Mercury Lounge in New York. After another show in New York the following night and one in Los Angeles, they will be off to Australia and Japan. After a surprise nomination for best Swedish Act at the European MTV Awards in November, anything seems possible. For Peter Björn and John, 2007 begins in quite different fashion than did 2006.

20 Years of Darkness: A conversation with The Body

Beyond the Immediate: An interview with Drahla

Raw nerve: An interview with Fotocrime

Time to Create: An interview with THEESatisfaction