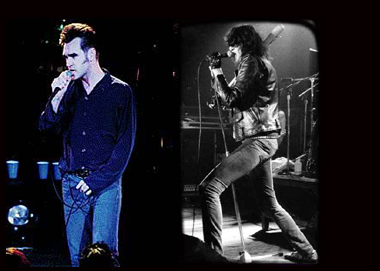 My DVD collection, although I am a music junkie, does not have much in the way of music in it. When I first got the player, I bought the requisite Radiohead documentary Meeting People is Easy, U2’s Rattle and Hum (one of the first music films I watched on a TV hooked up to a [gasp] stereo), and Ziggy Stardust: The Motion Picture. Purple Rain wasn’t out yet so I had to wait, and later I ended up purchasing Jeff Buckley’s Mystery White Boy. That’s pretty much it. Since then, the market has flooded with performance DVD’s and a handful of rockumentaries. Imagine my surprise when two music DVD’s ended up in my house that turned out, at first glance, to be polar opposites, and later proved eerily similar. I am talking about Morrissey and the Ramones. Time will tell if the similarities will rival (they won’t) the Lincoln/Kennedy weirdness.

Morrissey’s concert DVD, Who Put the `M’ in Manchester is a performance recorded in May of 2004, on the Mozzer’s birthday. End of the Century is a look at the history of the Ramones, their unique style of music, and nearly everything related. Doesn’t seem that close, does it? It would be too easy to go into the fact that both DVD’s feature interviews with obsessed fans who gush about the artists. Morrissey’s fans come from all over, tattooed, leather-jacketed and awkward. The Ramones’ fans come from all over, tattooed, leather-jacketed and awkward. Manchester begins with scenes of, you guessed it, Manchester. Century begins with a drive through Forest Hills, New York as the members recall their youths. Those are some quick superficial similarities, but let’s get into the meat of the presentations.

End of the Century is a necessary item for any Ramones fan or anyone interested in rock history. From the four original members coming together as the only fans of the Stooges in their neighborhood, all the way to the death of Joey and Dee Dee (the film was finished before the third original member Johnny passed away), this film is a nearly complete compendium of arguably the first punk band ever. In it, we learn different things about the band and the scene, not only from the members themselves, but from famous fans like Joe Strummer, Blondie, Legs McNeil and others. (One of the most interesting moments is when Johnny fesses up that upon hearing the Clash’s first single, “White Riot,” there were thoughts of both `these guys ripped us off’ and `this is the only band who is possibly better than us.’) Themes explored are Joey’s gangly New York Jewish youth which could lead, as his brother says, only to being a singer in a rock band, Dee Dee’s frustration with being in a non-drug taking band and possibly being a one-time male prostitue, Johnny’s right wing Republican views, Phil Spector’s shenanigans, the Joey/Johnny girlfriend debacle, and the various Ramone replacements, Marky, Richie, and C.J. Ultimately, the DVD concentrates on how massively influential the band was and is, and how unsuccessful financially they were in spite of it. The band went on for twenty-two years, thinking that their first big hit was always just around the corner, and finally, after many years of heartbreak, discovered that they should just be who they are and not disappoint their loyal fans. I was amazed at how much I just didn’t know about the Ramones and I’m glad that I know now.

Who Put the `M’ in Manchester isn’t alike in themes and format, but like Joey, Morrissey could pretty much do only one thing in life. Whereas the Ramones idolized the Stooges, Morrissey idolized another pre-punk band, the New York Dolls. Both had guitarists named Johnny. Both use stage names. Okay, so there’s really not all that much similarity between the two, you caught me, but both are genius. Morrissey, as on his CD Live at Earls Court, performs songs from throughout his solo career, a couple covers, and some Smiths tunes for good measure. He is — if not a technically proficient live performer, at times even mentioning the fact that he’s not singing on key — at least an extremely charming and captivating one. The DVD captures the perfect sound from the show, which unfortunately makes the, one can only assume roaring, crowd stifled to white noise. Instead of the eagle symbol of the Ramones, Morrissey stands in front of fifteen foot high glowing red letters spelling out his name. How Elvis (or Krusty) of him. There is some, but very little banter with the audience, the DVD is mostly showcasing the Mozzer as a gifted performer. In the end, that is what the Ramones realized that they ultimately were, gifted performers. So, see? There’s a similarity after all.

With Morrissey’s last album, You are the Quarry, the singer saw a huge resurgence in respect and admiration. Suddenly it was cool again to be a Morrissey fan. Although the Ramones did not have huge commercial success as they were making music, their legacy created ripples all throughout the rock world, and they gain more and more fans with every succeeding day. And thanks to some fashion mavens, the band has achieved icon status. These DVD’s are looks into the ups and downs of the music industry, one a snapshot of a once prominent singer of a big indie band, now rebounded alone in the spotlight, and the other a look at a band not appreciated until after they were already gone.

A brief history of out-of-touch musicians

Morrissey headlining emo-centric When We Were Young festival