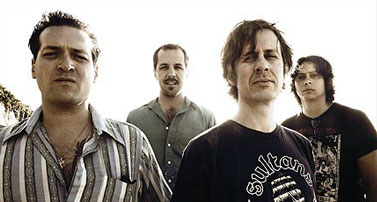 Punk rock is typically a genre and an attitude reserved for youth. Rebellion is for kids, as any jaded grown-up would happily tell you. But don’t tell that to Rick Froberg, a grown man who wants to rock out in his own smart-assed, grumpy way without any of those annoying youngsters getting in his way. On the leadoff track to The Hot Snakes’ incredible second album, Suicide Invoice, Froberg lets the cynicism fly as he laments, “Nobody does anything wrong/ nobody’s a dilettante/ everybody gets everything/ everything they want.” Lousy kids, think they’re so damn smart.

Froberg’s ornery rancor comes with a bit of a smirk, however, and when he chants, “I hate the kids,” one wonders how serious the former San Diegan and current Brooklynite really is. The Hot Snakes not only played their feisty humor with a straight face, but with lightning riffs and a ton of bricks behind each melody. That’s especially true in this furious anthem, opening slowly with wobbly strings and a squealing melodica before erupting into a maelstrom of garage rock riffs and some post-hardcore intensity held over from Froberg and John Reis’ days in Drive Like Jehu. So, kids, if The Hot Snakes put you down, just remember that they’re older and wiser, and had enough years of punk rock practice to show you how it’s truly done.