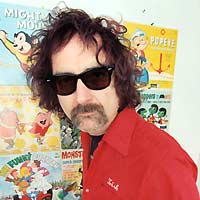 Scott McCaughey and company started recording Down With Wilco on September 10, 2001. An ominous beginning, to be sure, and the album didn’t even see the light of day until 2003. Whether it was the curse of Wilco, who earlier had their own album shelved, or some other reason, it took most people quite a while to hear two of the best albums of the early part of the century. Wilco’s stamp is all over the album, which is indeed why they get such prominent billing in the title. All of the songs are stellar, but there is one in particular to which I keep returning. “Dear Employer (The Reason I Quit)” is one of those special kinds of songs. McCaughey tops himself in the lyric department, as the words read like what you’d expect from the title, a resignation letter.

We can all identify with wanting to write a letter like this. We’ve all had bad bosses or worked for companies that sucked our souls. That’s what is so comforting and liberating about this song. We get to dream with the narrator, knowing that someday the writer of this letter will be us. “Dear employer, your escalators / Are very dangerous on the way down / They rip the skin and they pull you in / Spit out the boney bits and coffee grounds.” McCaughey’s voice is wistful as he sings these lyrics, not angry. That makes it even more appealing, as if he’s reached some sort of Zen state, having made the decision to quit. As the song goes on, he gives other reasons as to his departure, for the most part at the end blaming himself. But the real magic lies in the melodious and resonant closing, a repetition of the parenthetical words, “That’s the reason that I quit.”

The original version on Down With Wilco is finely layered with all of Wilco’s patented instrumentation, something that peppered Yankee Hotel Foxtrot so masterfully. It’s well known that Jeff Tweedy performs a few songs from his various side projects at his solo shows. At the one I attended, he did a couple of Loose Fur tracks, at least one from Uncle Tupelo, and one from Golden Smog. These make sense. He wrote these songs. But Tweedy has also been known to perform this one, and did on a magnificent widely circulated bootleg I have from Chicago’s Vic Theater in 2003. Sure, he collaborated on this one, but it was entirely written by McCaughey. It says a lot when, at the end of the song, at the rousing close, Tweedy says he hopes “Dear Employer” is a song that everyone will sing along to at his shows. “To me, it’s an anthem,” he says. Hear, hear.