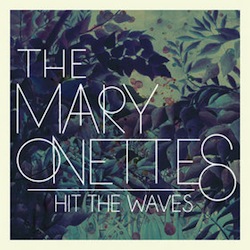 Sweden has a history of bright and shiny pop, from ABBA to Ace of Base to the Cardigans, and after two near-misses, four-piece synth-pop quartet The Mary Onettes come close to being counted amongst those ranks with their latest release, Hit the Waves. On this outing, Philip Ekström & Co. appeared to be on a mission to do just that, teaming up with an outside producer for the first time, Dan Lissvik (Studio, The Embassy). The end result is a collection of songs that take what The Mary Onettes have been doing since 2006 and kick it up one single notch.

Hit the Waves begins with a two-and-a-half minute monotonous “Intro,” not quite feeding into the first proper tune, “Evil Coast,” which sounds almost exactly like Robert Smith guest-starring on a Bon Iver album. These, unfortunately, were not the best choices to start the album. It was as though Lissvik was offering listeners a challenge: if you can get past these first two tracks, you will be rewarded what follows.

The third track, “Hit the Waves,” has a head-bopping beat, and it marks the point at which the album begins to really pick up steam. Its chorus is memorable, and the tune radio-friendly – for a radio landscape circa 1984. Therein lies the big question mark about the album. Is it retro or anachronistic? With “Years,” the classic MTV video is likely to play in your head – high coifs, white coats and low, sweeping camera angles around swaying androgyne new romantics. On the other hand, there’s no denying that the refrain (“Stay away, stay away from wanting”) is catchy as all get-out.

For a brief moment, there appears to be a shift away from this theme on “Blues,” but the bending guitar notes are a tease; bluesy it is not. It is, however, closer to Bon Iver than Echo and the Bunnymen, bringing The Mary Onettes temporarily back into the modern era. Those who make it to the final song, “How It All Ends,” either out of adoration or sheer curiosity, will be rewarded with a moody, lovely, beat-free denouement.

The Mary Onettes take a definite step forward with Hit the Waves. However, the band is unlikely to make any splashes in the mainstream, despite apparent attempts to modernize its sound with layered vocals, carefully orchestrated keyboards, and creative percussion programming. More often than not, the sound comes across dated, which could be forgiven if the bulk of the songs was just a little stronger. But if The Mary Onettes keep moving in this direction, that problem is likely to be remedied on the next release.