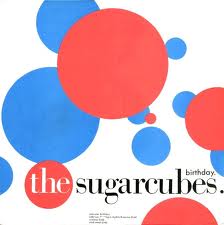 The Sugarcubes’ “Birthday” is the quintessential Björk single. It has all of her trademark qualities, her sexy shriek, the vivid imagery and otherworldly lyrics that we have come to know and love. “Birthday” is the song that started it all, the one that introduced a tiny Icelandic chanteuse to the world. I fell in love with her and her orgasmic howl when I first saw the video on MTV’s 120 Minutes. Watching Björk dance around in her little red dress and chirp with that voice, I was hooked after one single listen. And since that first howl with The Sugarcubes and on her own as a solo artist, Bjork has single-handedly changed popular music as we know it.

Even though I feel Homogenic is Björk’s best album as a whole, “Birthday” will always be my favorite individual song. The thing is, besides The Smiths “Unhappy Birthday,” Björk created one of the most original songs to relate to one’s birthday. The lyrics are filled with childhood wonder and imagination through the eyes of a youngster looking forward to that joyous day, so it seems anyhow. I love the little descriptions of what the child’s eccentric hobbies as she sings—”Thread worms on a string/ keeps spiders in her pockets/ collects fly-wings in a jar/ scrubs horse-flies and pinches them on a line.” I feel like we know this character, she’s an outsider and a loner who has only one friend in the world who she goes to visit and they listen to the weather. This is the magic of Björk her words and her voice. She creates these worlds with these characters that we all can relate to.

But towards the end of the song “Birthday” takes this ominous turn.

“Today is a birthday
They’re smoking cigars,
He’s got a chain of flowers,
And sews a bird in her knickers,

They’re smoking cigars,
They lie in the bathtub,
A chain of flowers.”

To me, it sounds more like a girl literally coming of age with this romantic crush on an eccentric hippie man living next door. I don’t get the impression of any wrong doing but “Birthday” ends sort of vague. (It actually sounds like Bjork is singing “they’re smoking seagulls” instead of cigars which, I prefer, and would have worked with the raven and bird imagery in the coda of the song.)

It turns out that it is the old man’s birthday and not the little girl’s. I guess the confusion I find is in the meaning of the last five lines. What does chain of flowers mean? What exactly is sewing a bird on her knickers? But, Björk has said about the song— “When I was a kid, all old men that influenced me sort of erotically, without doing anything, really. Men at 50 and stuff like that. But, you know, without doing anything … so that’s the feeling.”

This is the power of her sound and lyrical vision. Björk is not afraid to tackle subjects that most artists wouldn’t dare attempt to sing about. This merely drives home my point that “Birthday” is her best song. From the start, Björk is not singing about ordinary love she’s challenging us with lyrics and melodies that at first might seem rosy, but after further exploration we realize have serious thorns in them. And the thorns are something that Björk loves writing and howling about. We have enough singers who croon about the roses, Björk loves to sing about the other side of life and love, the darkness, the confusion and the doubt we all may feel as we trip around life searching for the perfect beat to call our own.

“Birthday” has a Velvet Underground kind of vibe that Lou Reed would have loved. Unlike most popular singers, Björk is not one to conform to any one specific style or theme. She creates innovative worlds with her trademark voice and ever evolving chameleonic style; there is nothing this artist cannot do. Björk is our generation’s Bowie, but, you know, female.

“Birthday” was only the beginning and is the ideal place to start for the novice Björk fan in your life. Now we have a canon of songs and albums to guide us on our journey. Listen to the beauty and the howl, and let her in. You will be challenged and forever changed.

Best Song Ever: Once