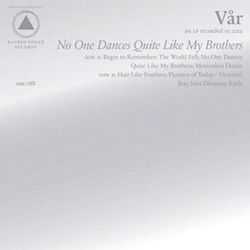 It’s a bit too early in the careers of the four members of the synth-based Danish post-punk group Vår to refer to the project as a “supergroup,” but listeners just catching wind of the band are likely to recognize some of the players from their other bands. Singer Elias Bender Rønnenfelt is a full-timer in Copenhagen-based art punks Iceage, who just a few months ago released the amazing You’re Nothing, while Kristian Emdal spends the bulk of his time in hardcore punk band Lower, who are set to release their first full-length album later this year. Yet Emdal and Rønnenfelt, along with Loke Rahbek and Lukas Højland, largely move away from the sounds of their other bands with Vår, a band more in line with the dark, gothic sounds of label Sacred Bones, on which they’ve released their first album, No One Dances Quite Like My Brothers.

It’s tempting, actually, to say that Vår is a goth-rock group, as their synth-heavy compositions fall heavily within a darker range of sounds and textures. But where there are more than a few parallels to labelmates like Zola Jesus or Pop. 1280, Vår by and large seem more interested in taking an experimental approach, sometimes exploring texture and drone more acutely than they do melodies or linear songwriting. Not that they don’t have some exceptional songs. “Pictures of Today/Victorial” is a powerful electro-dirge, escalating from a hum to a soar. And “Into Distance” is practically a Cure song — and a catchy one at that! But elsewhere, the band is all too willing to let their weirder instincts get the better of them. The title track is, essentially, a girl’s monologue spoken over ambient synth textures, while “Hair Like Feathers” creeps and lurches with more than a hint of terror.

There are times where Vår allow both their melodic and experimental sides to collide, as they do on “Motionless Duties,” but curiously, that’s less satisfying than their more overt attempts at pop music, or their darker, more explicitly drone-heavy tracks. That’s kind of the beauty of experimental music, though: Sometimes it will fail. And while it’s rare that Vår does anything that just simply doesn’t work, their failures are always interesting ones — difficult pieces with a kernel of brilliance that, fleshed out slightly differently, would actually end up as glorious successes. On No One Dances Quite Like My Brothers, the tracks that work far outweigh the ones that don’t, but when things do collapse or sputter, they so nobly, in the service of avoiding the easy or the familiar.

Listen to the new Vår single, “The World Fell”