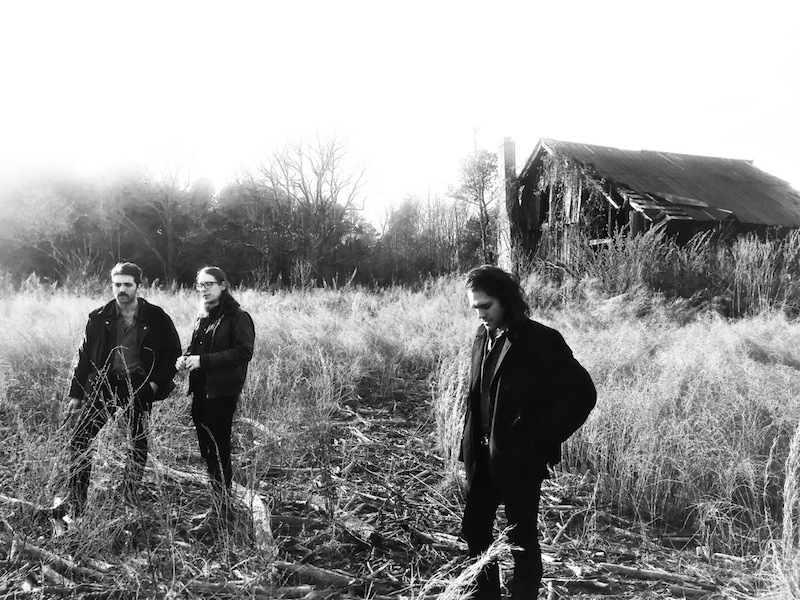 Bambara‘s music exists in shadows. Since their early noise-rock sounds on 2010’s Dog Ear Days, the Athens, Georgia band (now based in Brooklyn) have cultivated a dense and ominous form of post-punk. Their latest, Shadow On Everything—out this month via Wharf Cat—expands upon that sensibility with songs that bring in a broader range of instrumentation than on any of their previous albums (horn sections, eerie synthetic choirs), which reflects the band’s growth in a more logistical sense: They’ve expanded to a quintet when touring, broadening their capabilities and allowing them to showcase an even more dynamic presence.

Shadow On Everything represents another aspect of the band’s growth, as well. It’s their first proper concept album, a series of stories within stories about an ominous Western U.S. hometown that seems to have a lethal stranglehold on its residents. Its part Flannery O’Connor, part Cormac McCarthy and part Nick Cave, and it’s utterly chilling.

Treble caught up with Bambara’s Reid and Blaze Bateh and William Brookshire to discuss their nocturnal sensibility, broken hands and escaping where you’re from.

Treble: Shadow On Everything has a more diverse array of instruments than on past albums: strings, horns, etc. With this album, were you thinking outside of the limits of the band as a guitar-bass-drums trio?

Blaze Bateh: In the past it kind of limited us, but this time we just decided to go all in. If we wanted horns in something, we’d include that. Or strings. We just wanted to do more experimentation in that realm. Our sonic palette before was just drums, bass, guitar and all the manipulated noise that we’d add in. That was our main idea going into it. Lyrics and content come along a lot later.

William Brookshire: There’s always a point in the recording process for us where maybe we’re deep into the recording stage, before we record vocals, where there’s a specific sound we like that we’ve never done before, and we thread those little hints of themes throughout other songs. And once that webbing starts to cover more than one track, that’s where we start to have a feel for where we’re at with the whole record.

Treble: You’ve recently been playing live as a five-piece—how much did that contribute to the expansion in the sound of the band?

BB: That was a huge thing for us. Before with the three of us, it was guaranteed something was gonna fuck up because there were so many variables. I don’t think we could ever be completely comfortable on stage. Adding two people, we’ve been able to connect to the audience a lot better. And breaking up those elements among more people, there’s less room for error.

Reid Bateh: I don’t know if I could go back to playing guitar live, to be honest. Being freed of that burden, to be out there, it’s a whole different vibe now. It’d be hard to go back. The guitar was always my enemy. I was always hitting it on things, and that’s how I broke my hand. I was punching my guitar. And it feels nice, to not be stuck to it, actually.

BB: That’s how the whole five-piece came about, because he broke his hand. We started as a four-piece at first, and then it became five. We were talking about that for a while, but it didn’t happen until we had a physical limitation.

RR: It was really lucky that I broke my guitar, because of how it shaped our sound. For a while we didn’t pull the trigger on it until I shattered my knuckle.

Treble: Bambara’s always had a kind of dark atmosphere, a nocturnal sensibility. What draws you to that sort of aesthetic?

BB: First and foremost, in all of our records, we want to establish a mood and atmosphere, and pretty much create a world to kind of make it feel like a full experience. We just wanted to make it feel like you’re in this kind of dark, wide open atmosphere.

WB: You used the word “nocturnal,” which I like a lot. It’s a good way to describe this environment.

Treble: What brought about the idea of pursuing the sort of gothic Western narrative on the record?

RB: I like to have a sense of place when I’m writing lyrics for a record. And Swarm was very much based around city imagery. And I really wanted to do something the opposite of that on Shadow On Everything. I was trying to find like a sort of place or that sort of feeling. Like something that’s sort of all encompassing. Like the environment of Swarm, but something I don’t really experience myself. I was talking to some friends and they were telling me about their hometowns, and it hit me. I wanted it to be this western setting. The imagery’s that sort of idea, a hometown place.

Treble: Does living in New York influence your writing?

RB: Oh yeah, it definitely does. It’s hard to not have that influence, especially as far as imagery goes and all that. It’s always present. And that’s why I was trying to resist that presence for this record. Unless I lived somewhere else, it’s not something I can really turn away from.

Treble: Though you’re originally from Georgia, you’ve been living in New York for a few years. How has that changed things for the band?

BB: Being in a band in New York, you have to budget your time. You really have to make time for your art, because you have to work so much. That was one of the biggest challenges for us. We were all working so much that we sort of lost focus from why we moved here.

WB: We didn’t even finish that first record until Reid got fired from his job.

Treble: Do you still consider yourselves a Georgia band?

WB: Yeah, I agree with that. I always mention to people, we’re from Georgia but we live in Brooklyn.

Treble: Given that the title of the record is Shadow On Everything, shadows seem to play a big part of the album’s themes…

RB: Shadows are very important in the record, as far as an image of something inescapable from your hometown. Throughout the record, I mention shadows with the girl that’s always telling about her hometown and he’s fetishizing it almost. And she’s always trying to escape it. And there are stories about her hometown and people try to escape it, but they can never really escape it. Throughout the record, people are being devoured by the shadow of their hometown. It’s like a metaphor for the town’s grip on people. I thought it made a lot of sense because that’s something that’s sort of inescapable. Nobody ever leaves, or they die trying.

Treble: Do you think that that’s true in the real world, that you can’t ever really escape where you’re from?

RB: Yeah, I definitely think so. And I think a lot of people try really hard. A lot of the influence for this is kind of that idea. I bartended for years, and people always tell me about their hometowns. And it’s always this thing where they got out and they escaped, but they end up going back or they carry it with them. There’s no real escaping where you’re from, but people try. This is an exaggerated version of that. There’s a dark energy there and bad things are happening. People try to escape their hometown, but I don’t think it’s possible.